“We know that when Sasha-Lee walks onto the Miss World stage, she wants more than to win the competition…”

Sasha-Lee Laurel Olivier, voted one of the most beautiful women in the country at the Miss South Africa competition, jetted off to London on Monday to begin pre-preparation for the Miss World pageant to be held on December 14.

She flew out of South Africa armed with the good wishes of South Africans and a Beauty with a Purpose campaign that is destined to have a profound effect both locally and internationally.

Sasha-Lee is a survivor of sexual assault; she was repeatedly raped from when she was 7 until 11.

She said: “I was not believed when I reported my abuse and, for years, I thought that it was my fault. It is why my campaign #ItsNotYourFault is designed to support those who have had a similar experience; I want them to know they are not to blame.”

Her efforts are being supported by The Angel Network and active citizen Penny Stein who are helping her reach out to sexual abuse survivors across South Africa, with the distribution of thousands of Rape comfort packs.

“People who have been sexually hurt need the restoration of a little dignity when they have to report their abuse. These packs aim at doing that,” she said.

Beauty with a Purpose is a crucial part of the Miss World Pageant, with the organisation continuing to support and fund the winner of this segment.

Sasha-Lee’s suitcases are packed with a wardrobe that has been designed by renowned couturier, Ryan Keys from Keys Fashion. Werner Wessels, well-known pageant coach and stylist said he chose Ryan Keys to create Sasha-Lee’s wardrobe because “he is known for luxury and his sophisticated use of incredible textures. It’s why he was the perfect choice to create the elegant gowns that will compliment Sasha-Lee’s beauty.”

Included in Sasha-Lee’s suitcase is a very trendy pair of gumboots, a necessary item for the Gumboot Dance she will perform as part of her Dances of the World routine.

Stephanie Weil, CEO of the Miss South Africa Organisation said; “We know that when Sasha-Lee walks onto the Miss World stage, she wants more than to win the competition. She has a fervent desire to make a difference in the lives of women, children and men who feel alienated, alone and filled with self-loathing after being sexually abused”.

“We wish her all the best as we support her endeavours.” 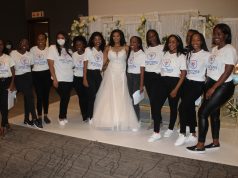